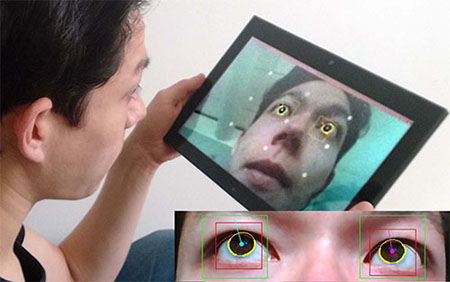 The code is available in three forms:

The project's webpage can be found here.

A video of the system in action (Python version) can be seen here.

If you use or extend EyeTab code in full or in part, please cite the paper above.

We track gaze by modelling the iris as a 2D ellipse in an image, and back-projecting this to a 3D circle, getting the real-world position and orientation of the iris. We take the normal vector of this to be the gaze direction.

The system has three main components:

A rough guide for setting this code up from scratch:

The system has several dependencies:

In addition, the SP2 version of the system depends on [VideoInput](// see: http://www.codeproject.com/Articles/559437/Capturing-video-from-web-camera-on-Windows-and) for providing high-resolution access to the front-facing camera. OpenCV's camera API is broken and does not support this. This library videoInput.lib is supplied.

NOTE: The VideoInput library only works when targeting 32-bit, but the rest of the system works fine with 64-bit.

4.2.7 Usage with limited manipulation or strength

Gaze-tracking for OS X, made simple